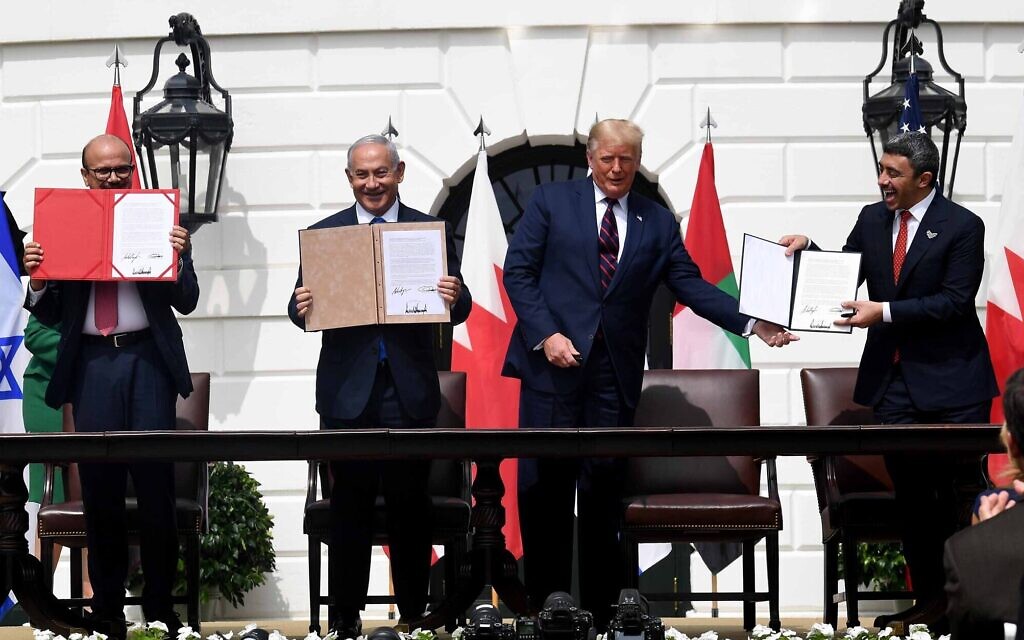 “In Israel’s entire history, there have previously been only two such agreements. Now we have achieved two in a single month. And there are more to follow.” Thus spoke US President Donald Trump near the start of his remarks to hundreds of people at the White House, and untold numbers around the world, watching on Tuesday as Israel established relations simultaneously with both the United Arab Emirates and Bahrain.

Our first, earth-shattering peace agreement came in 1979, when Egypt’s President Anwar Sadat — having restored his country’s self-respect in the 1973 war, after its six-day humiliation in 1967 — shattered three decades of intransigent Arab hostility to the very fact of Israel’s existence and signed the Camp David Accords with prime minister Menachem Begin.

And then came… nothing.

Israel had wanted to believe that after Egypt, the floodgates of normalization would open. Instead, Egypt was boycotted by the rest of the Arab world for its crime in legitimizing Israel, and Sadat was soon gunned down.

Only 15 years later, in 1994, did Jordan’s King Hussein dare to become our second full peace partner, liberated to publicly acknowledge his hidden alliance with Israel because prime minister Yitzhak Rabin had pledged to try to resolve the Palestinian conflict and had warily shaken hands with Yasser Arafat on the White House lawn.

And then came… nothing. Nothing, this time, for a full quarter century

And so, when Trump noted that he was overseeing the doubling of Israel’s entire history of peace alliances, he was also telling a whole generation of Israelis and of Arabs — a generation that has simply never witnessed such a ceremony before — that, yes, Israeli-Arab peace is actually possible. It can be achieved here and now. It’s not something that happened a couple of times long ago and then froze over, or that dreamers talk endlessly about being almost within reach.

And it’s hopefully not something that, after it is ostensibly attained, disintegrates into conflict and bloodshed, as was the case with the Israeli-Palestinian “peace process” and the strategic Palestinian terrorist onslaught of the Second Intifada.

For once, “let us put all cynicism aside,” Israel’s Prime Minister Benjamin Netanyahu said in his remarks. And for a rare few hours, in the midst of a pandemic, and even as Hamas tried to spoil the show with rocket fire from Gaza, everything about the ceremony encouraged us to do precisely that.

What Netanyahu called “the pulse of history” was tangible in the warmth of the separate interactions between Trump, the two Gulf foreign ministers, and Netanyahu that preceded the main event. If Tuesday’s widening of the circle of peace was insufficient, Trump vouchsafed to Netanyahu that “five or six” other states are waiting in line. “Frankly, we could have had them here today,” he said, but that would have been disrespectful to the UAE, which had shown the courage to go first, and to Bahrain, which had been so determined to join the festivities.

It was tangible in the content of all the leaders’ speeches — their individual declared commitments to genuine and lasting peace between our peoples — and the sincerity and warmth with which they delivered their remarks.

It was tangible in the little-noticed moments, such as when UAE Foreign Minister Abdullah Al Nahyan, having completed his address, walked over to where Netanyahu was standing, and, with attention focused elsewhere, they smiled at each other and exchanged a few words. Or when everybody — and especially the joyful star of the show Al Nahyan — laughed good-naturedly at the logistical complexities that inevitably arise when two-to-four leaders are signing and/or witnessing three accords.

If Egypt’s peace treaty with Israel was the first vital step toward the acceptance of modern Israel’s revival in the Jews’ ancient homeland, Tuesday’s ceremony may come to signify our belated acceptance by those further afield who, as Trump noted, have for decades been fed lies and falsehoods about Israel, and especially Israel’s ostensible religious intolerance.

The Palestinians are still absent, of course, dismally led in the West Bank by President Mahmoud Abbas into what appears to be a deepening alliance with the Gaza-ruling terrorists of Hamas. Still, the US president who brokered these accords remains insistently optimistic that, as he told the press pack during his Oval Office session with Netanyahu, “at the right time, they’ll be joining too.”

“We’re here this afternoon to change the course of history,” Trump said at the very start of his speech. “After decades of division and conflict, we mark the dawn of a new Middle East,” he went on, and “thanks to the great courage of the leaders of these three countries, we take a major stride toward a future in which people of all faiths and backgrounds live together in peace and prosperity.”

Trump delivered these hitherto mind-boggling claims in tones that were almost matter-of-fact. These new peace allies are “going to work together; they are friends,” he said, as though this was the most normal thing in the world.

But for a whole generation, 26 years after any of us last saw anything like it, Tuesday’s ceremony was anything but normal. It was, rather, unprecedented, surprising and heartening. For once in the tortured context of Israel and the Arab conflict, it was a pleasure to put all cynicism aside.

The article was published on The Times of Israel

... with Israel about boosting supplies of vaccines to deal with future waves of coronavirus infections, suggesting a lack confidence in the EU's ability to ... [...]

Like other countries in the European Union, its national vaccine campaign lags far behind that of Israel, Britain and the United States. Now there are ... [...]

Reports this week Royal Caribbean is set to offer “fully vaccinated sailings” between Israel, Cyprus and the Greek Islands from May will gladden some ... [...]

The EU's collective approach to buying vaccines suffered further blows yesterday as Austria and Denmark announced a pact with Israel, and Slovakia ... [...]